After this, Jesus crossed over to the far side of the Sea of Galilee, also known as the Sea of Tiberias.  A huge crowd kept following him wherever he went, because they saw his miraculous signs as he healed the sick. Then Jesus climbed a hill and sat down with his disciples around him.  (It was nearly time for the Jewish Passover celebration.)  Jesus soon saw a huge crowd of people coming to look for him. Turning to Philip, he asked, “Where can we buy bread to feed all these people?”  He was testing Philip, for he already knew what he was going to do.

Philip replied, “Even if we worked for months, we wouldn’t have enough money to feed them!”

Then Andrew, Simon Peter’s brother, spoke up. “There’s a young boy here with five barley loaves and two fish. But what good is that with this huge crowd?”

“Tell everyone to sit down,” Jesus said. So they all sat down on the grassy slopes. (The men alone numbered about 5,000.)  Then Jesus took the loaves, gave thanks to God, and distributed them to the people. Afterward he did the same with the fish. And they all ate as much as they wanted.  After everyone was full, Jesus told his disciples, “Now gather the leftovers, so that nothing is wasted.”  So they picked up the pieces and filled twelve baskets with scraps left by the people who had eaten from the five barley loaves.

When the people saw him do this miraculous sign, they exclaimed, “Surely, he is the Prophet we have been expecting!” When Jesus saw that they were ready to force him to be their king, he slipped away into the hills by himself.

That evening Jesus’ disciples went down to the shore to wait for him. But as darkness fell and Jesus still hadn’t come back, they got into the boat and headed across the lake toward Capernaum. Soon a gale swept down upon them, and the sea grew very rough. They had rowed three or four miles when suddenly they saw Jesus walking on the water toward the boat. They were terrified,  but he called out to them, “Don’t be afraid. I am here!”  Then they were eager to let him in the boat, and immediately they arrived at their destination!

This story is familiar.  This fishes and loaves account graces just about every children’s Bible we own.  The second story is equally as familiar.  Jesus walking on the water toward His kindred disciples.  This miraculous account strengthening their faith and affirming the Deity of Christ.

But the verse that grabs my attention most, the one that speaks to me this morning but doesn’t show up in a children’s Bible, is the little gem sandwiched in between these two well-known stories. Verse 15.

When Jesus saw that they were ready to force him to be their king, he slipped away into the hills by himself. 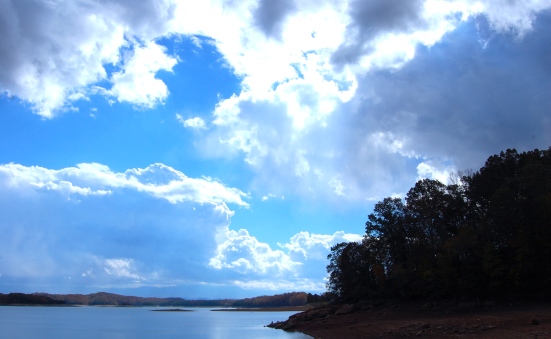 Saturday night, my husband was feeling the weight of his upcoming week.  Looking ahead to the next four days, Brent knew this week would hold many heavy-laden appointments.  Not to mention, he had just come off a very weighty week, as well.  So Saturday was his verse 15.  Brent needed to slip away into the hills by himself.  He needed a time to refuel with God, just the two of them (or the four of them, whatev-) in order to “walk on the water” this week, if you will.

What did this mean for the boys and me?  We ate Mexican without him.  I did the bedtime routine solo and prepared for church on my own.

But what doest his mean for Brent?  He was obedient to God’s calling to pull away, rest and refuel.  And the benefits of this rejuvenation trickles down to us all week-long.  We may have lost him for Mexican, but in turn get 100% of him Monday through Friday.

Brent is an introvert by default and introverts refuel in solitude.  But Saturday night wasn’t about being an introvert.  It was about verse 15.

Most days, we all  live in one of two places.  Feeding the five thousand or walking on water.  We run hither or thither, busy at work and play.  But let us not overlook the little gem in the center.  Verse 15.  Solitude.

Do you need a verse 15 today?  A little time to pull away to the hills?

I encourage you to take it as Jesus did. Your walking on water tomorrow will benefit from your walk to the hills today.

How do you refuel?  Are you quick to take rest or do you feel guilty for pulling away?  Share…