{Here is a word from Mr. Crenshaw, himself…}

You may be thinking that this word is pregnant with existential meaning or has lingering aftershocks from the phrase “Carpe Diem” (Dead Poet’s Society). Or you might think it’s my attempt to ask husbands to love their wives in the “now-ness” of every minuscule fraction of every second of every day of every month of every year.

I am motivated to write on marriage because “now” is the word found first in Genesis chapter 3. Genesis chapter 2 concludes with marriage in it’s most pristine form. God walked Eve down the aisle (so to speak) and presented her to Adam. He (Adam) sang a love song/poem over her (as some scholars believe).

The man said, “This is now bone of my bones and flesh of my flesh; she shall be called ‘woman,’ for she was taken out of man.” Genesis 2:23

After God officiated the ceremony, the Bible records that they were “naked and unashamed” – hence the first honeymoon.  (Becky’s blushing)

However, after the first and purest wedding in history, the word “now” appears.

Genesis 3 opens with these words: “Now the serpent was more crafty…”

Immediately, Satan moves in to attack the institution of marriage. He wasted no time then. He is wasting no time now.

The reason I write with Becky is because Satan is attacking marriage – NOW.   It’s been his strategy from the beginning and it will be his strategy until his end.

Today, let us pray against the craftiness of the serpent.  For as surely as we walk throughout this day as husbands and wives, he slithers nearby, waiting for the moment of “now”.  Be aware of his presence, be aware of his intent, and most certainly be aware of your power to overcome him through God’s Word and prayer. 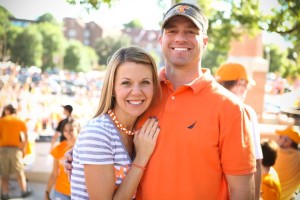 Father, I pray Ephesian 6 over my marriage… Let us be strong in the Lord and in his mighty power.  May we always, as husbands and wives, put on the full armor of God, so that we can take stand against the devil’s schemes. For our struggle is not against flesh and blood, but against the rulers, against the authorities, against the powers of this dark world and against the spiritual forces of evil in the heavenly realms.  Therefore we put on the full armor of God, so that when the day of evil comes, we may be able to stand our ground, and after we have done everything, we stand. We stand firm, with the belt of truth buckled around your waist, with the breastplate of righteousness in place, and with our feet fitted with the readiness that comes from the gospel of peace.  In addition to all this, we take up the shield of faith, which can extinguish all the flaming arrows of the evil one.  Let us take the helmet of salvation and the sword of the Spirit, which is the word of God. And today we pray over our marriage in the Spirit on all occasions with all kinds of prayers and requests. In Jesus Name, Amen.