Newbern Cherokees. That was our name.

We were red and white. Our uniforms weren’t fancy. In fact, they resembled practice squad hand-me-downs. But I didn’t care. I loved football. It was my eighth grade year and this was our biggest rival, the Trimble Demons. The air at their middle school football field smelled of grilled hamburgers, fresh cut grass, faint cigarette smoke, and the arrival of fall.

We had just stepped off the team bus receiving stares from the opposing crowd of parents, grandparents, and younger siblings…. dressed in purple and gold.

Craig “Win” Worley. That was our coach’s name. We always thought he was joking about his middle name, but later found out his dad really did give him that middle name — Win. He had been a defensive back in college and kept an adrenaline level somewhere between Redbull and a Pit-bull. He had intense eyes. The kind of eyes that made you shudder if you forgot your history homework, but on a football bus made your testosterone feel like a swelling tsunami.

Coach Worley required zero talking on the twelve minute bus ride. He stood at the front looking at us and pointing to his intense eyes. He only said one sentence over and over — “You better get it.” He didn’t have to explain what “it” was. We knew “it” was his own internal version of the song Eye of the Tiger (insert intro riff here). Before the biggest game of the year, Coach Worley’s missile- locking eyes made us feel invincible. We would’ve played the Green Bay Packers that night if the bus had stopped at Lambeau field.

One of our team maxims was that we hit first and hit hard. Coach Worley was emphatic that the opening kickoff was where the tone was set for the entire game. He took pride in making a bunch of puberty stricken boys mimic the Battle of Dunkirk from Braveheart. Instead of swords and horses clashing it was Riddell shoulder pads and stickered helmets with chewed-up mouthpieces. But this was his mantra. Hit first –hit hard – set the tone.

I can remember the Trimble Demons having a running back named Ricky (great 80’s name). I knew him somewhat from summer league baseball. Rumors were that he scored three touchdowns the prior week. Ricky just happened to be the one at which I was presently running.

We had kicked off to the Demons. I wasn’t sure who I would need to hit/tackle. I just knew I had a lane and that someone would feel the storm surge of my 118 pound tsunami of teenage awkwardness. Ricky was in my lane. Just as skinny as me, but less acne. 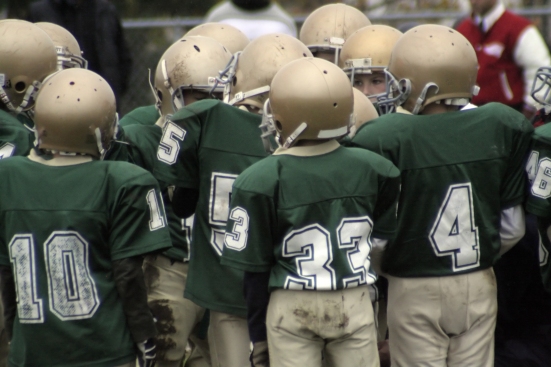 I remember hitting him as hard as I could and feeling the equal combination of dizziness and satisfaction. He was peeling himself off the ground while holding his hip. I had triumphed! To this day I can’t prove it, but I have to believe the Rocky theme played at that very moment somewhere in the world just for me.

We beat them badly that night. But the typical lessons of football are not what I carry away from that memorable moment. I don’t stop to reflect on such things as: discipline, a winning attitude, teamwork, etc. No, what sticks with me most from that Thursday night in 1989 is that, as men, we have to hit someone on kickoff. We must run to the battlefield as David toward Goliath (1 Samuel 17:48). We have to face our enemy and take action. We have to wage the good war (I Timothy 1:18) with a spiritual intensity that makes me envision Jesus telling us to “get it”…not in our eyes, but in our hearts.

However, many times we fight the wrong battle. To borrow language from Douglas Wilson, we think the battle is “with non- believers while it is really over non-believers.” We think it is about church buildings and programs, but it is really about the Church in our city. We think it is about the room, the time, the song, the sound, the website, the location while, all along, our invisible enemy is running at us, ready to hit first.

Let this be a challenge for us all to be warriors in prayer.  Let us kickoff this fall season by hitting our knees. Chances are we might knock down a demon (Ephesians 6: 12).

And let me leave you with this…Revelation 1:14 tells us that Jesus has intense eyes.  Eyes like a flame of fire. I like to think He is saying to us, “You better get it.”

(This was originally written for the men of Brent’s young adult ministry of our church.  So challenging. And powerful.  Thought I’d share.)

4 thoughts on “Hitting On Kickoffs – by Brent Crenshaw”